skip to main | skip to sidebar

Interview with Richard Taylor, creator of The Misled Romance of Cannibal Girl And Incest Boy 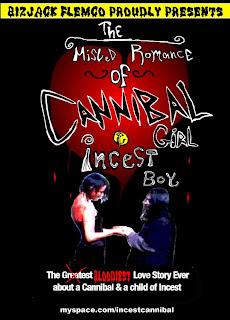 In my never-ending search for great and weird cinema, I stumbled upon this short film on their official myspace, after hearing about it from the Troma forum. Richard was very kind and direct, and seems like one of the good guys in this world of independent horror cinema. Hope you enjoy.
-How did you become involved in filmmaking?
Well in high school, in Drama class we were asked to write and direct are own music videos. I made a simple video that got some laughs in class and had so much fun I started making videos out side of class. That begun my Production company Bizjack Flemco Productions with my friend/Co Partner Zack Beins. We would always come up with silly/funny ideas and film them in his back yard and edit them with a VCR. One day a Career Fair come to our school and a teacher from the Career Education Center (CEC) was there promoting a Digital Film and Video Class. Me and Zack jumped at the opportunity to take Film classes while in High school and that is where we learned how to really make movies.
-Tell us the story of Bizjack Flemco Productions.
Oh well... I guess i kinda did already ... well ... good time to whore myself..... that is half of filmmaking you know..... The myspace is Myspace.com/Bizjackflemco .... If anyone out there would like to check out some of ourFilms... and be our friend.
-Tell us about the previous short, Unicorn.
Unicorn is a story about a Pedophile who picks up under age girls in the park with Unicorn lollipops. I took a Super 8 Film class in College and just wanted to tell a messed up story ... that I knew it would be even more messed up being shot on Super 8, because of its grainy andsnuffy look. My teacher, I remember did not care for the film to much .. but I did get an A+ and even got the film into the Troma Dance Film Festival .. and On the Best of Troma Dance VOL 5 DVD which just came out from Troma Entertainment! http://www.troma.com/
-Tell us about the birth of The Misled Romance of Incest Boy And Cannibal Girl?
The Misled Romance of Cannibal Girl and Incest Boy started as a Special Effect that I wanted to do in a movie. I wanted to show a girl biting off a guys dick but had no story or anything to go with it. I thought it be funny for a guy to meet a girl who is a cannibal and take her home and get his dick bitten off... but then he grows another dick right after... then you learn the guy is a product of Incest and he can grow extra body parts after being torn a part..... Well then this Idea turned into Cannibal Girl and Incest Boy. I don't know when, but we decided to make Cannibal Girl and Incest Boy a Sequel to Unicorn, I guess because we shot the film on super 8 again we felt it was almost like a sequel. You see the baby being born in Unicorn , becomes Incest Boy ... and the story of him falling in love with a Cannibal Girl who is afraid she will eat him.
Why did you choose to make it in film instead of digital?
I could have never gotten the look of Cannibal Girl and Incest Boy/Unicorn I did with Digital. Real Film is just so awesome ... There is just nothing more satisfying then hearing the clicking of the film running through the camera , something you justdon't get with Digital. Also with Digital you can just do the scene over and over and over again with no real worries, but with real film ... your burning Money as well ..second after second. Film don't come cheap. Its $10 a roll , for 3 minutes! so you practice more with your actions and actors when using film, which comes out better in the long run.
-Did you have any difficulties during filming?
I would like everyone now to go to Myspace.com/Incestcannibal ... where you can buy The HEAD SPLITTIN SPECIAL EDITION DVD copy of THE MISLED ROMANCE OF CANNIBAL GIRL AND INCEST BOY! there is a great special feature where we go Behind the scenes of Cannibal Girl and Incest Boy and you can see how hard it was to make the film ... We had our lead actress get locked in her room by her boy friend at the time during filming! We had to shoot the film in the most discussing field ever full of Glass, Condoms, and bugs, Our lead actor Incest Boy never stopped Bitching... it goes on and on ... like any film there was lots of problems..... Pick up the DVD to check out more!
-Lloyd Kaufman from Troma films has a hilarious cameo in the beginning. How did he get involved?
Me and Zack both worked on Poultrygeist Night of the Chicken Dead, doing Blood FX in the film. We also act in it. So we figured after working for 3 months for free on his film .. sleeping on the floor, eating cheese sandwiches and showering in cold water ..... he owed us a least a cameo... and wouldn't you know it ... the guy also releases the film on Troma DVD on the Best of Troma Dance VOL 5 !!! Pretty damn sweet! ... some people only watch the film cause they hear he's in it... so it never hurts to have cameos in your film. 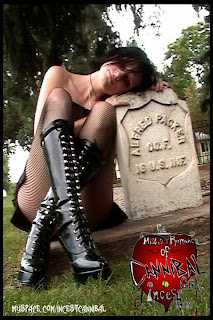 -Janine Laurent is quite a woman. How did she get involved in the film? And what can you tell us about the rest of t he cast?
I can tell you that no one in the film were actors. Janine worked at a video store cashier and was picked after we went through 2 other actresses. She was very exited to do the film, but really had no idea what to do, acting wise, and since this was a silent movie she really needed to be big with her expressions. She pulled everything off Amazingly and I could not be more impressed with her. Paul (Incest Boy) was just a friend from high school who I picked for his look ... not really his Personality, and I knew he was a Ninja freak and knew a few moves ... so we had him strike a few poses in the film.... But like I said ... we just used our friends... they were cheap and for the most part easy to work with.


-How did Tim Johnson get involved? the soundtrack is amazing.
I know Tim from his band the Pinkoes. I would go see him perform in bars all the time! We started talking after shows and became good friends. I used one of his songs in "Unicorn" called SOn of Kazzan, and then for Cannibal Girl asked him if he wanted to do the whole score for the film ... Lucky for me, He did it! and you are right the soundtrack is amazing! You know you can pick a Soundtrack up from Cafepress.com/CannibalGirl (Boywadddda Whore)

-How long did post-production take?
Post took a while ..... we had to do all the transferring to Video ourselves.... and it was a headache... We basically set up a projector and filmed the wall with our DV cameras... so what your actually seeing in cannibal girl is us filming a wall. Tim Johnson who did the music in the movie did all the editing on the film ... and he really edited the film fast ... less then a week we had pretty much what you see in the film now.


-How do you feel about the state of independent horror films today?
With myspace and Digital film at rise ... any one can make movies... and advertise them. Independents in any genre have it good right now ... just think back in the day how impossible it was to make a movie ... now you can just go buy a $100 dollar camera and start making a movie. I go to Horror conventions and I meet new filmmakers who have done exactly what I have .... made a movie. You sell your film on a table and people buy them! people seem very exited when they see Cannibal Girl and Incest Boy ... Because its just something that they would never hear in the main stream .... they seem very interested and wind up picking up a copy on DVD over any Horror Holly Wood Remake.... and that makes me feel like I am doing something worth a damn.


What's in the future for you? Any new films in the horizon?
Yes in fact ... a Feature film called "Atom the Amazing Zombie Killer" Written by Myself, Zack Beins and Tim Johnson. it will be like no other Zombie movie you have seen before! I have always said I would never do a zombie movie, just cause there is so many of them, But I think we have a good twist on the zombie Genre...Because our Zombie Movie will be the First Zombie Movie to feature NO Zombies ... Hm ? I wonder how that works? well Keep looking for it ... add the myspace at Myspace.com/Atomthezombiekiller 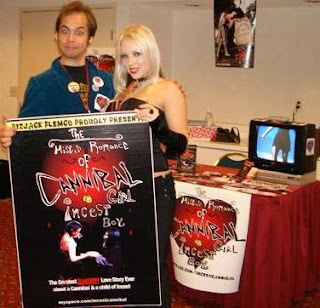 Well, that's it. I'd like to thank Richard for his willingness to open up and be cool about his experiences. Now go to the website and buy his damn DVD already!!! 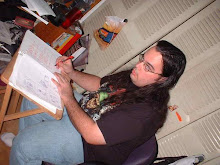